Happenings on the Farm 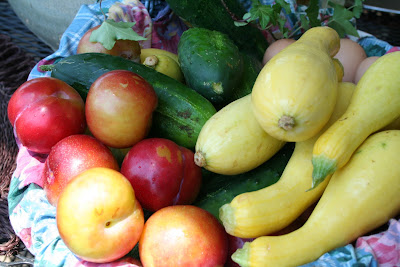 Growing our own veggies is one of the most rewarding things I've done.
But what if your not in a position to have a garden?
Buy Local.....In the town we live in they have local farmers sitting out on the tail gates of their trucks selling their fresh fruits and vegetables.
This is a fun day for the whole family.
We carry a big basket and haggle with the locals...If I don't know how to cook something I'll ask...It's usually older folks who still do things the ole fashioned way and they love telling you their secrets to the best squash around..
I bought cucumbers this time to make a fresh cucumber scrub that Taylor and I wanted to try.
The plums just bring back happy childhood memories....The road we lived on had tons of plum trees and I remember riding my bike and stopping to get a handful of the sour treats and stuffing my pockets full of them...nothing better than salt and a plum...:) 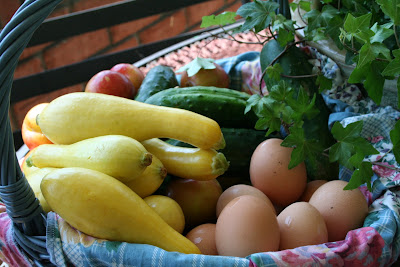 Sometimes I do things the hard way just so my kids will be able to say we used to have to shell peas for hours on the back porch....I know it might be easier to just buy em but I would miss out on the 3 hours of the laughs, the moans, the complaints, and the happiness of making my kids work for their food..
Last year I gave each of my older kids 7.00 a piece and let them out at the farmers market and told them to 'buy the most food' and who -ever did got an ice-cream.. They had a blast and it was fun to see what they bought..
We are gearing up for blue-berry season and we have a local guy who has a good size patch.I give each kid a bucket and say don't come back to the car until it's filled...I know I'm mean!!They beg to go back though.
Sometimes we think we're doing our kids a favor if we make things easier for them, but I believe the opposite is true. Teach them hard work and when the load is easy they will be thankful....
Posted by Just A Family at 12:07 PM

I love green plums and salt too!

And we make our kids shell the peas also (and snap the beans). We put in a movie and everyone has their own bowl. We see who can fill theirs up first!

How are you? Just checking in.

What special memories...and so healthy too!