The past, The present, and the future..

He bought the car the week she was born..."this will be her first car" he said..
I humored him because this little girl barely a week old would not be driving for a long
time.. 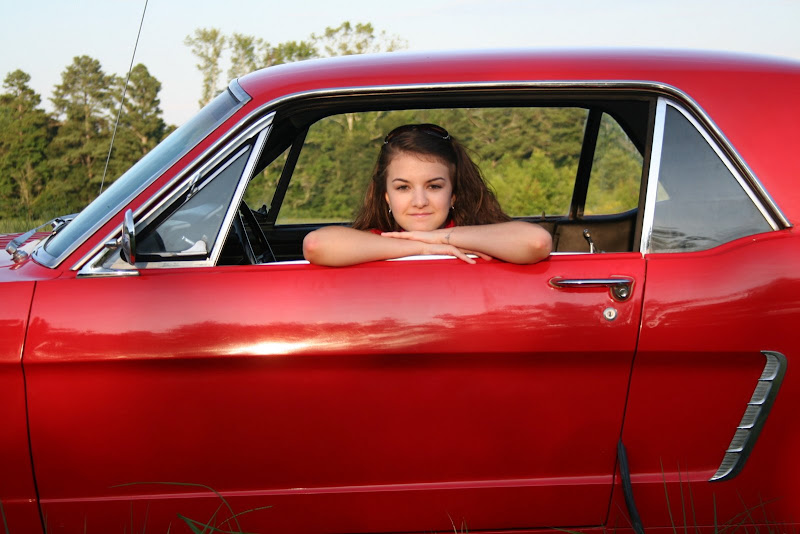 He kept it all these years despite several serious buyers along the way..He had it re-done
twice and wouldn't dare let anyone drive it..not even Scott. 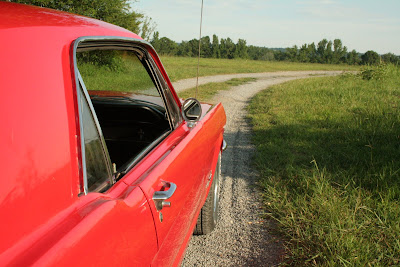 Everytime we would go visit he would say "go look at your car."
Again I humored this old man we affectionately called 'Papa Bear.' 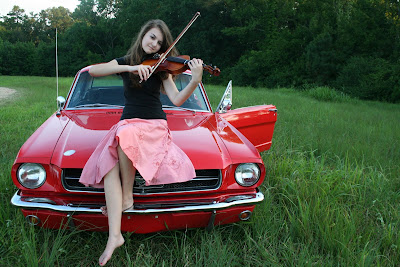 Papa Bear died in December 2007. In his will it was clear that this car was Taylor's.
We took it to the mechanic and it's been there for 2 months. 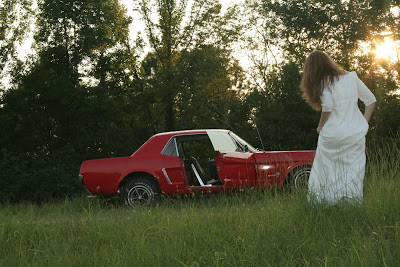 Scott drove it home this weekend for the first time, and as I was driving behind him
I thought papa bear would be proud. His grand-daughter has her
car. I started crying because this was his first and last gift to her.
A 1964 cherry red mustang for a girl..Who would do that when the girl has a brother only
two years younger? I'll tell you who: Papa Bear... he was a rebel in his own right and no-one could figure him out on most days..he had a reason..
As she sat behind the wheel trying to learn the gears and ignoring the loud 'glass pack' she looked over at me and said "this is cool."
Taylor and I have been taking drives all weekend. Wind blowing in our hair, sun-glasses on and
the memory of a man who rides with us..
Well done Papa Bear...:)

I love your blog and read it often. I have made my blog private and the system allows 100 'readers'. While I have already invited the max, I expect many will not subscribe. Please let me know if you want to continue reading my blog so I can add you to the list once I have space. I thank you for your support and comments. I have been uplifted and inspired from the blog community around grief and loss of pregnancy and babies. Overall, blogging to strangers and friends, has been an incredibly therapeutic experience. In this chapter of our life, I'd like to change the focus of my blog to more sharing our day-to-day family life and want to protect the identity of our upcoming baby boy, if everything goes as well as it seems it will, from the world wide web and strangers. chelso935@hotmail.com

Congratulations, Taylor! My first car was a 1967 metalic blue mustang convertable with 3 on the floor. My dad gave it to me after saying since I was a little girl that was what he wanted me to have.
Enjoy your car and your memories!
(but be careful :-)

Your blog is always so beautifully written. I just look forward to reading it everyday. I keep your family in my prayers. I really do. If we lived in the same state, I would join in the 5K and support you in honoring your William.

What a special PaPa Bear miss Taylor had (still has with the Lord). What a beauty of a car for a precious young lady.

Cool car Tay! You will look marvelous in it! I still can't believe your old enough to drive!
Much love,
Michael :)

Sweet story! Tay you are so pretty in the photos!

May I ask what campbells hope means?

Tay Tay, these pics are so absolutely amazing!!! I love the violin pose. I want to come over and have you take some pics for me.
Love ya girl and love the words Rob put to these precious times.
A