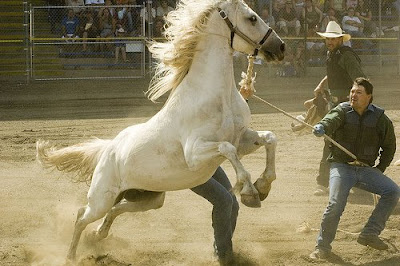 I was reading one of my favorite blogs the other day and came across her analogy of boys and horses and I just loved it. I also agreed with it totally.
You see we just recently gave away a horse we had hand raised since the horse we called 'Winnie' was 4 months old. We loved her. She was so pretty and beautiful.
When you looked out over the pasture and the sun was making her shine..she was breath taking.
She even looked good when you were looking at her from the fence line. Graceful and slick.She ran as though she was a prize racing horse, mane flying in the wind.


But when you got up close you started to get a little nervous. She had no discipline in her life.
She was rough and rowdy.She did not like to be led around by a lead rope.
She fought you the whole time.
Forget putting a bit her mouth. She was her own boss and she knew it.
She had a big problem with throwing her head up, nibbling at your fingers, and biting your arm.
She was pretty worthless. We bought food, and had someone coming over to do her feet every 3 months but it was all for not. She gave no enjoyment except to look at. She was a worthless horse and it was all our fault. We did not train her. We let her have way too much freedom and not enough time training.


We tried to fix all of these problems when we realized we had messed up in her training but she was older and trying to un-train her was beyond our capability. We had indulged her while she was young and cute but the end result was not what we desired.

On Laura's blog she wrote:
"Recently, I was correcting my son Jonas for some foolish behavior he had displayed. I also included Jerome as a recipient of my lecturing due to similar behavior on his part. As I was speaking, God gave me the analogy that when a boy acts foolish, he is like an untamed horse--he is acting wild, with no self-control, and is not useful to anyone. An untamed horse will not allow anyone to ride him, nor will he be fit to pull a carriage or a plow. A wild horse is good for one thing: to be watched, a spectacle. Isn't that what my sons' behavior is when they are acting foolish and out-of-control? A spectacle. In contrast, I told my sons that a horse that has been tamed has accepted the bit in his mouth and is willing to be led obediently. A tamed horse can be used for transportation, work, or leisure. A tamed horse has submitted to his master and is self-controlled."


In our society it's very common to see wild untamed boys all around us. Most people accept this as part of the normal process of boyhood until that little boy is not as cute as he used to be.
Then the same people who laughed with you while your little Johnny had a tantrum are looking at you with scorn and disapproval.

Most parents spend more time training their boys in the art of baseball than they do in training them to be leaders for Christ.

Is there a time and place to be wild and work off their boy energy of course. My boys jump, wrestle, act goofy ete......but they know the time and place..(most of the time.) We are still training.
In Eccl 7 v18 it says The man who fears God will avoid all extremes.
There is a time and a place for everything...

We have got to take our training seriously. I know some who don't train because they think their angel is too young and don't understand what is being asked of them. I say guard yourself..
It's very dangerous when you put off training......Before you know it you have a 1000 lb horse that refuses to be led and there is nothing you can do about it.......
Posted by Just A Family at 10:29 AM

Thank you for your kind compliment! I also LOVE your blog and your wisdom. I wish that I had met you like Cameron got to in Liberia! Maybe one day . . .

Also, we can't believe the recent pictures of Joseph! He has grown so much!

I love your blog post. I think you have wonderful wisdom to share. It is great the way you write you definately have a talent. Check out my blog. I would love your opinion on my recent post.