She stood silently crying at the Amish casket that held her beloved. Her "boss man", as
she lovingly called him. The tears were marked with such sadness but she leaned in close
as Cooper went to hug her and she looked at him and said,
"Coop, we will see him again"
The older ones holding on to the little ones.
A family who has lost everything and in the midst they cling
to the one thing their earthly father passed down that the tornado couldn't take away.
A heavenly Fathers love.
A heavenly Fathers purpose for such a time as this.
An earthly Fathers spirit. 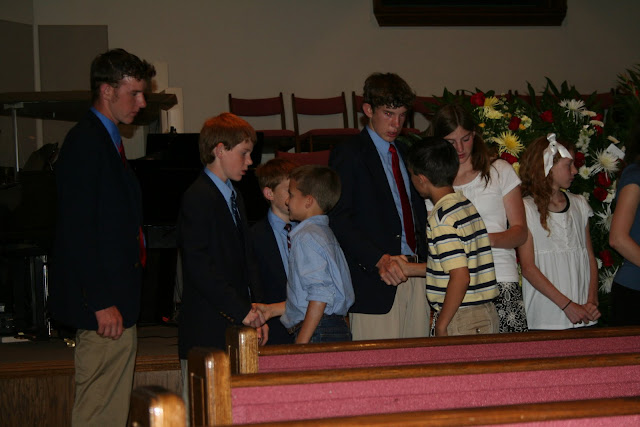 Their father taught them how to stand.
They knew what he would expect and they did not fail
to show each and everyone of the thousand people there
that they caught their fathers spirit.
His finger prints are deeply embedded in each of his children..
the gentleness that marked Tom Lee
is also the gentleness that marks this Lee Family.
His wife, Sherry who lovingly rubs Judsons hair over
and over as he pulls at her skirt and she gently pulls
him closer to her, looking over at Tom just to make sure
she's not dreaming. Just to make sure this is all "real"
Her gentleness still intact, but her heart still clinging
to the unbelief of it all. 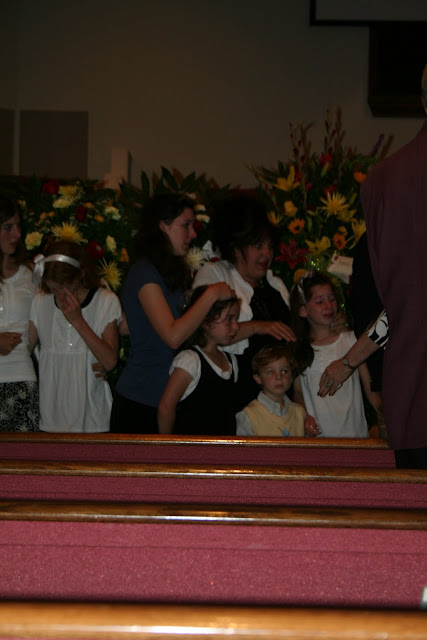 Friends and family pour into a service.
At least a thousand come to say good-bye. 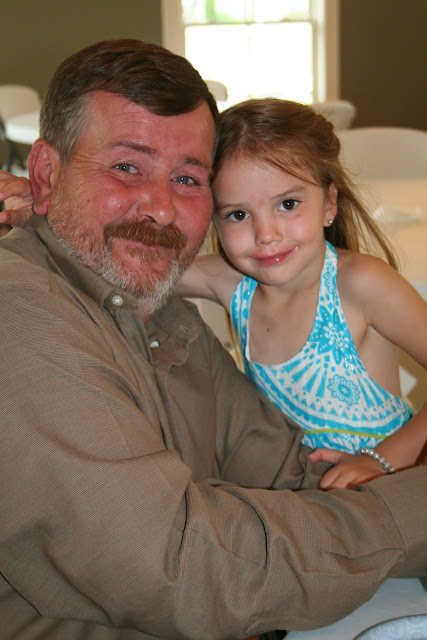 One of our dear friends, Jeff Brodock,
was recognized at church by the whole
church body for his dedication to getting to our friends
the night the tornado happened. To say he is a hard worker
under stressful times would be an injustice of words.
It took three hours for Jeff to make a path to get to the Lees
but when he knew they were trapped, he would not stop.
( he would do no less for your family)
He got help to this family.
Thank you, Jeff for always being
the first on the scene and for always loving "our children"
and for all the times you've helped our family. 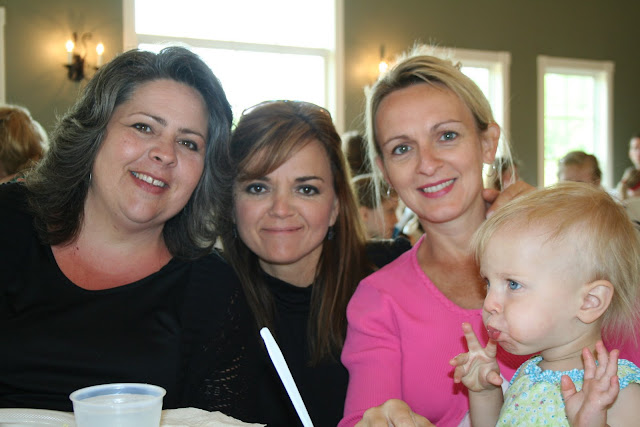 My dear friends and I all together at last since the tornado.
Kelly and her family lost their house but the Lord spared
every one of their 9 children. The Lord blessed them beyond words.
They are truly an example of holding open hands and saying,
"it's all yours Lord"...
Kathy is Jeff's wife and she should be a firefighter as well because
she was one of the first women on the scene. She drove into a disaster area
because our friends were there and she ended up at the Lee's house as well.
Emotions over take her if you bring up that night.
She recalls the kids all huddled up together in wet blankets.
Eyes staring up at her and each child standing that night
and thanking her for coming.
My church family never ceases to amaze me.
They are our family. Every man in our church
has taken off work, has helped carry the burden that each of these families
have had to walk under.
We are not alone during our difficult times,
the Lord provides a church family to drive into the darkness.
In the words of our Elder Ted Phillips, "When I drove into that dark valley, I knew I wasn't leaving without my family"
That's just what he did the night of the tornado.
He and his sons drove into the darkness of Shoal Creek Valley
and would not come out until the next morning and piled in
his eight passenger van were the Crawford family (10 people),
and the King family (6 people).
He would not leave them there though.

The oldest son of Tom Lee
Jordan Lee stood in front of the thousands of people
and said,
"The Lords gives and the Lord takes away..
Blessed be the name of the Lord."
"We do not ask why God took our Father we just Thank God
that He gave us a Godly Father for as long as He did." 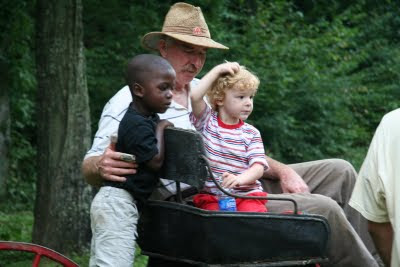 While on a campout with the Lee's, I noticed him
sitting there. Looking into the fire. I noticed his boots.
Wet from the dew, a little worn but a "good worn."
A comfortable worn.
That was Tom Lee.     ﻿ 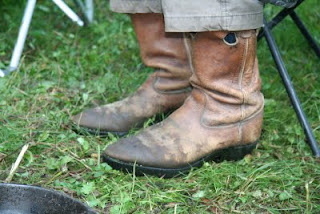 Thank you for sharing this post....how grieved I am for their losses.
Please contact me through my blog account....I am unable to figure out how to email you. If you would share your mailing address with me, I would like to send my sympathies to the Lee family (may be best to do through your mail service).

What a beautiful post on such a sad story. Is there an address where we can send a note of encouragement or sympathy to the Lee family?
Through this is shows what a wonderful church y'all have..it truely is a blessing.

Just yesterday, I found both Kelly and Kathy's blogs ... and watched the video interviews.

I didn't know they were your friends.

I am so sorry for ALL that you and your friends are walking through right now. I will be praying for y'all.

You are BLESSED to have such close friends and church family. Our family has walked through some very difficult crises this year (nothing compared to your friends, but TOUGH just the same) ... and we have walked them all ALONE. Our church family has not walked along side us in our time of need. So sad. So hard.

We cry out to the Lord asking Him to bring such friends into our lives. Truly, you are all blessed to have each other.

Thank you for the update. Still praying for everyone!

What a church family indeed!!! What a testimony! Thank you for sharing!!

Thank you for sharing. What a wonderful example of the body of Christ.

Beautiful post...so sorry for their loss.

Beautiful Robin. Thank you for sharing your heart. We continue to pray for Mrs Lee & family as well as Kelly's family.

Oh Robin...I am so sad I didn't get to know Mr. Lee here on earth, but thanks to your blog, I feel like I got a glimpse of just a snippet of this man's great life for God.

We will not stop praying for these families as well as all who have been affected.

And I'm sending up a prayer for you tonight--I can imagine that your mama heart hurts so badly for Mrs. Lee. My heart aches and I didn't even know them....

I haven't commented on your blog often, but I feel as if I know you via Kathy and Kelly. To me and my family, you are part of the "Alabama gang." Thank you for sharing about Tom Lee. He seemed like a man who most definitely kept JESUS CHRIST first and lived in such a way as to have "no regrets."

My husband and I sit here holding hands and reading about this beautiful tribute to this day of heartache.
What a precious friend you are to this family.Some day she will read all this...she will know she and her family are loved!!

Holding you in our prayers tonight!
Cindy from Rick-Rack and Gingham

Thank you Robin, for sharing these moments. I've been a long time reader of Kelly's blog and more recently, of Kathy's blog. I came over from Kathy's post 'Bound by Blood'. I don't think you can explain the lump in my throat and ache in my heart over what your dear people are going through, in any other way than the fact that we are indeed 'bound by blood', the most precious blood of our Saviour! What a beautiful testimony your local Body shines, a great edification for the larger Body.

And Mr. Lee, what a precious man, made evident by his precious family! Robin, this is such a tender tribute to a man whom I'm sure must have been a gentle giant in the faith. Though I don't know them, your post has given me a glimpse of a very great thing, the fruit of a faithful and steadfast man and a gracious and trusting woman. Very good fruit!

Hugs, blessings, and prayers from a sister in Texas. ~Amy B.