What they didn't know then... 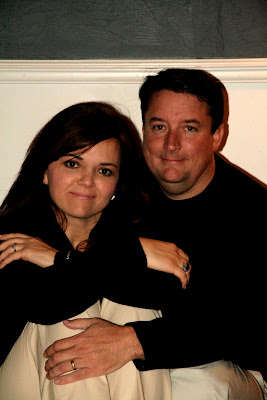 These two people are my parents.

Two people who's love for each other is vast and immeasurable. It sometimes seems like an ocean, never running dry; even when their times together are few and far between it still is full, the waves of it overlapping on the shore and spraying off onto us.

Their lives daily paint a picture of Christ and His bride. Daddy by loving Mama in the sweetest of ways. Not just flowers and token gifts but real love. Love that shines out of him and makes all who see them together know that they are in love. Love that comes home from a long day at work and sees the brown eyes that hold so much admiration, respect, and honor that stresses from the outside world visibly melt away when he hugs her and breathes in her hair and tells her that she is beautiful. Love that is there when she needs him to be, holding her hand and praying with her and washing her in the word. Love that knows how to make her feel precious.

Mama's love towards Daddy is one that I hope I can come close to one day. She is continually giving of herself for him. Submitting herself to his path for our family. I watch her as she greets him in the morning and night, Her love for him glowing out of her. She is constantly trying to better herself as a wife for his sake, making improvements in areas that I think she could not be any better in. She is a true proverbs 31 woman. At night, just before he gets home, she goes and dresses herself, fixing her make-up and hair just so. for him. She has this smile, this sweet, head tilting smile, that I know is his smile. The one she uses just for him.
She respects him, deeply, her love being a fruit that comes from that seed, and the seed taking root in Christ, her first love.
She is constantly showing me what a wife truly is.

Together, they could do anything.
They could have a vision that goes so much further than themselves, reaching to future generations to come, generations that they will never see in this life.
and they do.
They could go through numerous hardships and come out walking closer than ever, hand in hand, with each other and with their Saviour.
and they have.
They could rescue a dying child from a third world country and bring him back to a loving, Christian home.
and they did.
They could set themselves aside on a daily (minutely!) basis and pour themselves out onto us, their kids; guiding us and training us and keeping us on the path of the Lord.
and they do.

So, today I would like to wish my parents a very, happy anniversary and many more loving years to come.
We love you!!
~Taylor for all of the White kids

What a precious post Taylor! Happy Anniversary to your dear parents!!! Have a blessed day!
Love ya'll

What a sweet tribute and very, very true!

That is so sweet. it made me want to cry!! I love you guys!!

Oh my daughter thank you for hacking into my blog!
You are such a precious gift.

Thank you for sharing such a beautiful picture of who your dad and mom are. So well written!

That is sooo wonderful!
~Happy Anniversary!!!~

How blessed are we that we have another Rob in the making. love ya girl and Happy Anniversary to Mom and Dad.
A

That was great. Nana

FABULOUS! So honored to have you following my blog. Blessings!