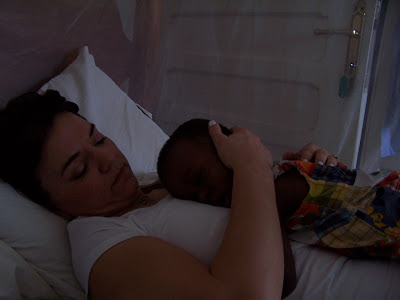 I took Jo to the guest house and changed his clothes and loved on him alot.
He seemed sick....He would just go to sleep and sleep for an hour or so and wake
up for alittle while then back to sleep..He had never had anything to eat besides
milk three times a day so he was very hungry and weak and dehydrated. He could not
use his hands to feed himself and he could not use his feet at all...I started feeding
him and making him drink alot and we got him some antibiotics..He started feeling better
after a couple of days...He would eat anything I put in front of him...He didn't know when to stop though...I spent hours laying in bed with him. Holding him and talking to him..I made sure when he would fall asleep that I would be there when he woke up...
I wanted and needed him to know that I would take care of him and look after him even when he was asleep...I would wake up in the middle of the night and just stare at him and wonder how come our family was chosen to be apart of this little blessings life.
His color could be purple. His color does not matter. His color is the color of my little Liberian son..whom I've fallen head over heels for.
Posted by Just A Family at 5:29 AM

And my little Liberian son-in-law! ha! He is a doll! I will call you tonight. I am praying for yall!
Love you,
Michael :)

Oh! I'm so glad you are with your baby now. So when WILL you be going to the embassy?

Poor little Jo has his ups and downs because of his condition. I'm so glad his mommy will be with him from now on!