This little girl is named Rosebud I know she is so pretty she doesn't look real but she is...she is 3 months old and is a miniature jersey milk cow. She is beautiful and she will give our family an average of 1-2 gallons of milk a day. Why? you might ask well...for one reason we live on a 40 acre farm and have tons of grass, fields of hay, and lots of lots of children who need work to do. So we invest our money in things that will produce work and teach our children responsibility. We don't do sports because of the sheer number of children we have but also because we would be at the ballpark a lot and well, I can't see giving up my meal time with Scott and singing around our big ol' table at 6:30 every night for the bleachers.  We also only have a limited time with each of our children and I don't know but working along side each other and building these memories of working on the farm seem like our best investment.The best use of my time. 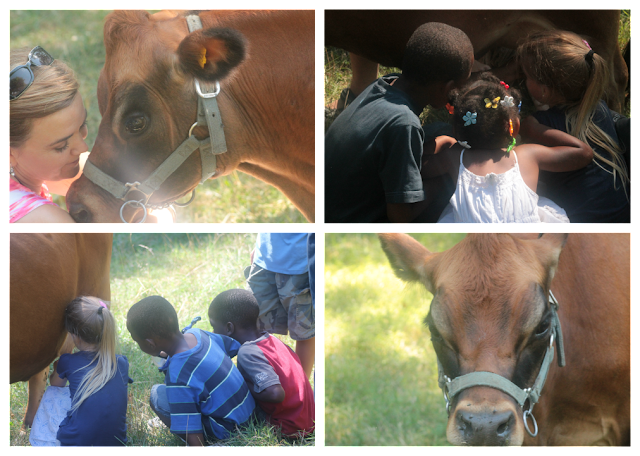 Why is work so important? Canning tomatoes and weeding the gardens? Feeding chickens and gathering eggs? Cutting grass and picking blackberries? It teaches work ethic. For our family it has been teaching endurance lately. That's the great thing about having lots of things to do when you live on a farm. Some days it's a pleasure getting up early and weeding a vegetable bed and some days it's the very last thing you want to do but you do it because you have to, not because you want to. Old logic...I hear myself. I sound like my grandmother sometimes but it's true. So many times we don't want to do things that God has designed to make us into the people He wants us to become. A little dose of hard work usually keeps you from gossip and from having a bad attitude. (I say usually ok) After the guys have been working for a while in the heat we'll take them a water or a popsicle and the smiles can't be hidden. I'll say words like "fine job son" or "you're going be able to teach your children so many different things". Work, it was what made my father in law such a hardworking man in hard times. It was what made a boy a man and I want that for my boys. I want them to be hard working men who know a thing or two about dirt, animals, and taking care of things. Now don't get me wrong...we have had lots of trials and many errors since we started. We are new to this whole living on the farm thing..but we're learning together. 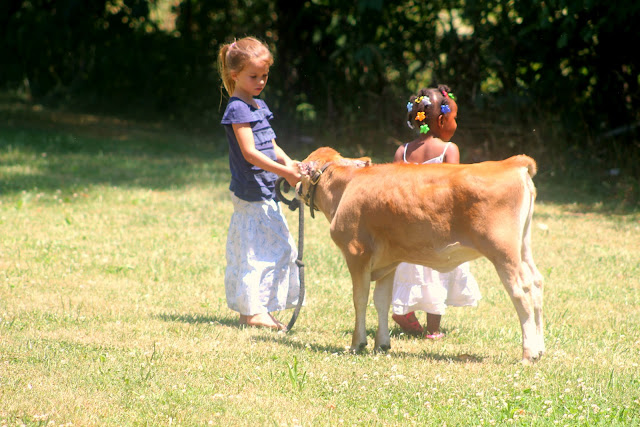 Our girls wear aprons and our boys carry knives (most of the time) and our guys can change diapers if needed and our girls can hang a picture with a shoe. :) We hang our clothes out on the line and only eat oatmeal in the morning unless Taylor makes her homemade cinnamon rolls.  We are learning new things every single day. I hate the t.v being turned on during the day and we usually only watch one show at night together.
Our oldest work along side us. Go ahead and gasp! I know, it drives some people crazy to think that our 19 year old daughter still wants to be in our presence..but she does and she does it well. She is canning tomatoes right now with Channie, and James Taylor playing in the background. She is so old school. :) Tucker is painting a room for me and does all the chores outside. He has grown into a remarkable young man..already thinking of his future wife and how he's going to support her. I love that! I love that my guys already have the mindset of marriage.

So work, it's been a good thing for us. We work hard but we also have fun together... So what would I do if we didn't live on a farm? I would have above ground gardens for the kids to work. I would go to the farmers market and give each child $5.00 and have them pick out something for supper; haggling with the old farmers on the back of their trucks. I would make my own bread or soap..I would always have the yard work done by the children.
Grow a flower garden. I did this and it was just 2 packs of wild flower seeds and I threw them in a dirt bed...now we have fresh flowers at our table every night from our garden.

We have always wanted a milk cow but didn't feel like we had enough older ones to start but now we do...We are also going to get a couple of pigs to add to our chickens and rabbits. So that equals work and lots of it. :) I love that! I love the sound of work for my children.

Don't you? Now you get out there and make you a long list of work for your children...you'll feel better and so will they.

I promise if you don't believe me just see what the Lord thinks on the subject of work..

Proverbs 21:25) “The desire of the lazy man kills him, for his hands refuse to labor.”

(Proverbs 12:24) “The hand of the diligent will rule, but the lazy man will be put to forced labor.”

(Proverbs 10:26) “As vinegar to the teeth and smoke to the eyes, so is the lazy man to those who send him.”

(Proverbs 18:9) “He who is slothful in his work is a brother to him who is a great waster.”

(Proverbs 26:16) “The lazy man is wiser in his own eyes than seven men who can answer sensibly.”

I love Rosebud! She is a cutie!

Oh Robin...thank you for writing about what you would do if you didn't live on a farm. Ironically, we live in a neighborhood with the word "Farm" in it...but it is the furthest thing from a farm! I was raised a city girl but I'm a farm girl wanna-be. (but I'm a little scared of farm life, too...:)

Work is SO GOOD, you are right! I have a lot of room to grow in the area of teaching my children to work. Thank you for helping put a fire under my bottom!

My kiddos love to grow things but I don't foster that desire in them and I need to do better. They have 2 tiny tomatoes on their little potted plants right now and you would think they've got acres and acres of harvest as excited as they are!!!!

I just love your family....and I absolutely cannot WAIT to meet you ALL! ;)

We, too, live on a hobby farm and are seeing the blessing of work in our kids. They are being asked by the neighbors here if they are willing to work haying for them. So, the neighbors also notice good work ethics.

Laine took the words right out of my mouth. I love how God works. Just this morning I was planning on lending a homeschooling book to a neighbor. Before giving it to her, I wanted to flip through the pages. One chapter caught my eye: How to Handle Burnout. I read it and was encouraged to do more work together! That was this morning on my porch after having some God time! Then I read this and clearly believe that God wants us to get working! I don't live on a farm but know there are many things we can do. I love the soap idea. I will be making a list of things to do. Thanks for your encouragement!

Great post Robin. We love that we live on a farm & that even in the helping out (which each family member has to do to run it properly) the children are raised with a good work ethic.
Miss Rosebud is cute. I didn't know you could get miniature jerseys. Ours is full grown & she is still beautiful ( although the kids are scared of her as she went through rather a wild stage). Hopefully we'll be milking at the end of the year!
Hope you have a lovely weekend & enjoy your warm weather ( it's cold here tonight).
Blessings
Renata:)

I just wanted to leave a comment wishing you and yours a blessed 4th. Blessings and hugs are sent your way from the Lees!

Love it! Y'all are gonna be great at this.